Who can say that they’ve been taken to the cinema as one of their first dates?

place to stuff your face with buttery goodness.

It is said that the movie theatre, similar to cable television is gradually dying as a result of the infamous World Wide Web. “Netflix chief content officer Ted Sarandos says that we’re witnessing a generational shift“. Attitudes are changing as cinema ticket prices are climbing, ‘laziness’ is increasing and the thrill of adventuring to the movies is dying, why pay up to $40 for a ticket, popcorn and drink when we can google a torrent for the desired movie and wait for it to be instantly downloaded? No charge, no rules and the comfort of your own home right?

Well, according to Torsten Hagerstrand and his theory of individual time geography, he devised three main constraints that hinder individual daily activity: capability constraints, coupling constraints and authority constraints. Together these three categories reflects how “human spatial activity is often governed by limitations and not by independent decisions by spatially or temporally autonomous individuals“.

Reflecting on my own recent cinema experiences, I have discovered that my two greatest limitations are: capability constraints and coupling constraints.

The most recent cinema experience was courtesy of my boyfriend, who surprised me with tickets to Suicide Squad to kick off my birthday celebrations. Over the past 3.5-years we have developed a routine when going to the movies. When picking the movie it is vital that we pre-book tickets no earlier than 7.30pm and ensure we have two middle seats towards the back of the cinema, as well as ensuring that no one has chosen to be next to us (unless it is a sold out movie). Upon arrival he will buy a large popcorn and coke, and I will have  a small coke and packet of star burst.

To begin the night our first constraint was a coupling constraint. He booked the tickets online, however failed to notice that he had not selected the correct day. Although luckily the staff at Event Cinemas  were understanding of the situation and changed our tickets, free of hassle. Shortly after we encountered a capability constraint, prior to the movie we decided to indulge in our dinner and continued to indulge in popcorn and sweets. As the movie was drawing to a close I began to hear someone snore, he had fallen asleep.

While this movie trip does not high lightly the full effect of Hagerstrand’s constraints, it can prove that these constraints appear naturally.

Time, place and cost are the three biggest issues an average person consider when 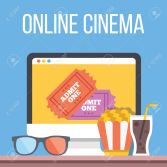 attending the cinema. With the increased reliance on internet and technology, many ar
e preferring to stream or download movies rather than actually go. Having instant and free access eliminates Hagerstrand’s constraints, and the ever growing web will prove to beat the purpose of a cinema.

Although how can we abolish the old and replace it with the new, when there are so many individuals in society that value tradition? It is evident that through the introduction of the Gold Class experience, VMAX, 3D and 4D experiences cinemas are already trying to enhance our viewing.

So yes cinema is losing to online streaming, but for those who love their traditional cinema routines will find that it will be the environment to change not the practice.

Every generation has its own distinct characteristics, and the way each and every one has interacted with digital media vastly differs. It is said that older Gen Y’s and all of Gen X can be described as the ‘digital immigrants’, preferring TV over youtube. Whereas younger Gen Y’s and Gen Z can be considered ‘digital natives’, preferring to surf the social media world and pass time on Youtube.

As the more newer generations are growing up their abilities to interact and work online is becoming far more advanced. We are now in a world were connectivity is so easy and there

is now a heavy reliance on ‘digital machines’.

As a result of our constant reliance on our devices, it is driving change in the media landscape. The changes are almost so instant and noticeable as people are cutting TV chords and instead now paying up to $14.99 a month for a premium and unlimited package on Netflix.

However it is not only the latest online streaming programs that are kissing the traditional television package goodbye, it is the younger generations interest in exploring TV shows, movies and sport from around the world. The interest no longer lies only in the local sporting events or national TV, rather interests are now wanting to explore on a global level.

My boyfriend, an avid TV show and movie watcher, sports fan and soccer fanatic (Arsenal to be exact). However his show/movie consumption is mostly done off the computer, a mixture of torrented TV shows ranging from Suits, The Walking Dead and Power and live streamed sports events. “Watching shows off the internet is easier and instant. I can get them a day earlier without the constant

annoyance of pointless TV commercials”. However when Foxtel announced that they no longer will be showing all Live English Premier League games he was not impressed and his television consumption was cut more than half. “We can stream games but most of the time the streams are unclear and if you have Facebook there is no point waiting for the repeats because someone will have spoiled it,” he said. “It is good publicity for Optus and they are offering  more options than what Foxtel ever did, but for those of us who aren’t with Optus it is really annoying because we aren’t left with many secure options.”

From 1,677,000 Australian EPL watchers, “15% of EPL viewers switched broadband provider in the past 12 months, compared with 10% of all Australians 14+ with a fixed line service in their home. ”  “EPL viewers are also more likely than other fixed broadband customers to stream TV, movies or video via computer during an average four weeks: 44% compared with 38% of all people with a fixed-line internet connection at home.”

Going back to the interview I completed with my dad, he laughed when I asked if streaming shows or sporting events would be something he would consider. “Why would I want to stream anything and have to stare at a tiny computer screen? I go on the internet to check my emails and I watch my TV shows to relax on the lounge after a hard days work. If I had to be on the internet to watch TV I wouldn’t bother.” As you can tell he was not a fan of the ideas merging.

As ‘millennials‘ are advancing in technology, networks such as the EPL are now expanding

their outreach to fans beyond games, live broadcasting and merchandising. They are also tackling social media to reach out to fans and gain a greater viewing. This can be seen through twitter @premierleague, where live updates and the latest news can be found.

Sesame street, Play School, Bear in the big blue house and the Teletubbies. 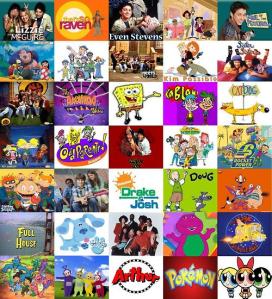 Only some of the popular television shows that shaped our childhoods.

As the years changed throughout primary school, traditional weekly morning tv didn’t. ABC was the prime channel for children’s morning shows, where sing-a-longs to ABC’s got me through the dreadful process of getting ready for school.

Television impacted the way I told the time, school mornings I would often wake up with Bear in the big blue house at 7.30am and once I heard the Sesame Street theme song I knew I was already late for school. Of an afternoon, 3.45pm was prime time for Rollercoaster and shortly after watching Neighbours and The Simpsons I knew I could be expecting my parents to arrive home from work.

When I started high school, my family set up Foxtel into my home. The Disney Channel and Nickelodeon became my routine on weekdays and on the weekends. Whereas now my TV intake is almost half of what it used to be, being introduced to torrenting has greatly influenced the way I access and watch TV shows. Now TV watching is done behind a laptop screen however, on the off occasions at 8.30pm tuning into ARENA with my family to watch Real Housewives of Melbourne.

After observing my own relationship with television, I asked my dad. What are you memories of growing up with a TV? His answer greatly differed from my own, and highlights the generation gap.

“When the television first came out your grandparents thought it was nonsense. But after years of being the only family out of all my friends to own a television, they eventually got one. It was nothing but a square box with two antennas on the top. I used to have to stand at the TV and move the antennas for certain channels, and everything was in black and white” said dad

. “These days TV isn’t a privilege, but when I was growing up TV meant family time, if I was good I was allowed to watch my favourite show for 30minutes a day. After dinner we all had to sit around in the lounge room and spend the rest of our night together, when you and your sister were little we used to do that to but now that everyone has grown up it isn’t like it used to be”.

In our household we have six televisions, with two Foxtel boxes. As a result of this the television dynamic has changed in our household. During my trip to Italy this year, I found that each culture value television in different ways. For instance after visiting two families on my trip only one had a TV where the other explained that when living with so much family a Television isn’t needed.

“We only have one TV in the house, we’ve never wanted more and we hardly use this one. In this apartment building there I have four other siblings living with their families, we are always together. A newspaper and my family is all I need for entertainment and news, televisions are just a waste of money and time” says Attilio. “I bought a TV for my children, so they don’t miss out on growing up in this new age. When I was a little kid, we read the newspapers and went out in the town and spoke to locals. That was entertainment, not being hypnotised by a box”.

After leaving Australia and experiencing another culture for five weeks, you begin to understand the cultural differences and values. The cultural values of television not only differs between culture and ethnicity, but also generations too.

Over a decade ago educator Neil Postman described the ascendancy of the Age of Television and the decline of the Age of Print as “the most significant American cultural fact of the second half of the twentieth century”. Modern media acknowledges “television is undeniably the most powerful influence in our society today… we can communicate anything we choose almost anywhere in the world… instantaneously, in a puff of electrons” . The evolution television has had numerous positive impacts throughout the world, from education to cultural awareness and awareness of the current news and events happening around the world.

However, no matter how greatly the infamous television has impacted our world. It is evident that through upbringings and diverse cultures that the memories and dependence we have on TV greatly differs. Imagine if the world reverted to a time where there was only newspapers and the local radio, how would the newer generations cope?